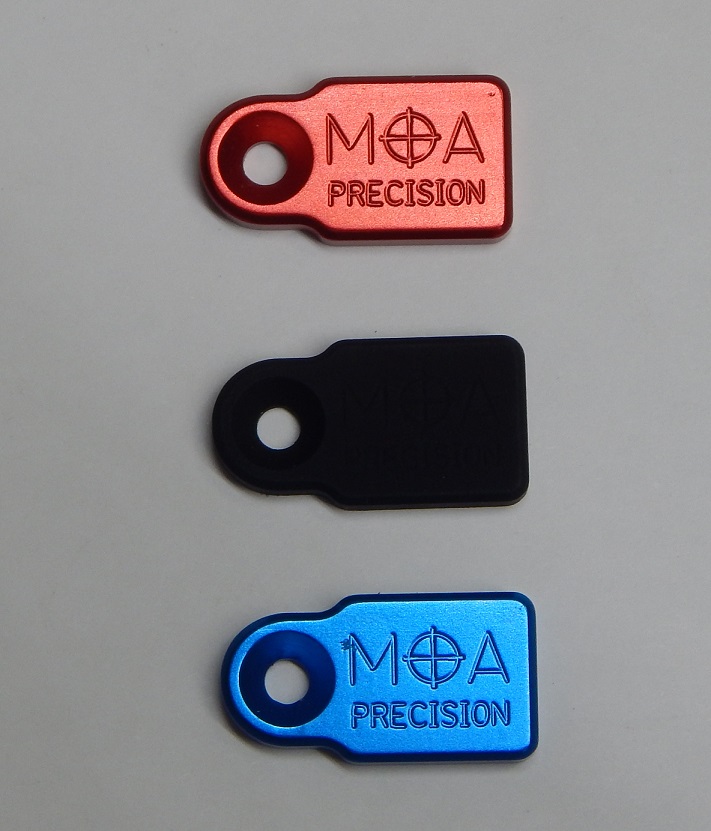 Oversized Bolt Release (carrier latch) Button, manufactured by MOA Precision. NOTE- THIS IS AN AFTERMARKET RELEASE TO UPGRADE THE M3000/3500, NOT A LARGER VERSION OF THE FACTORY M3K PADDLE! It can also be used to replace the M3K paddle if the tiny metric screw threads strip out. Requires drilling and tapping factory carrier latch for #6-32 screw, or use with the MOA Precision tuned carrier latch extractor which is already drilled and tapped. Bolt release is 6061-T6 Aluminum, Anodized. Screw is hardened steel. Made in USA! NOTES- Factory M3000/ M3500/ M3020 carrier latch extractor is not drilled or tapped. M3K is drilled and tapped for a 2.5mm screw which is quite prone to stripping out, and must be re-drilled and tapped to use this button. Use a #36 tap drill and a quality #6-32 tap and tapping fluid or cutting oil. It is easiest to remove the Carrier Latch extractor from the gun, and drill and tap through at the center of the spring pocket from the back side rather than trying to drill from the outside on the top of the domed button. Grinding or filing a flat spot on the top of the domed button is preferred for maximum thread engagement. The MOA Precision Bolt Release and Shell Stop KIT includes both the paddle and a carrier latch extractor that is already drilled and tapped for the larger #6-32 screw for drop-in installation. See separate listing.

There are no reviews yet.